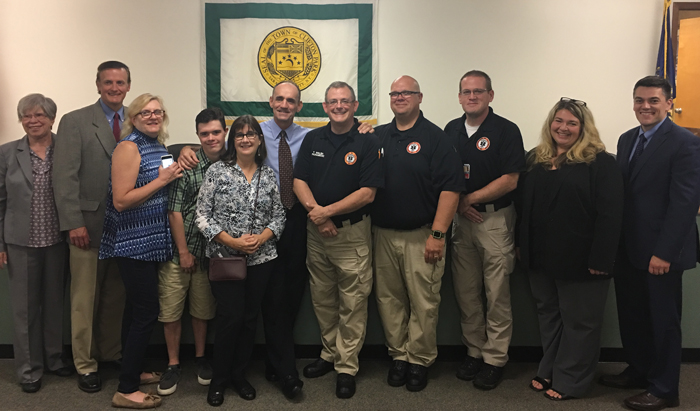 After a life-threatening bee sting and losing consciousness while on the phone with Dispatch, our crew arrived just in time to make a life-saving difference.

Shortly after his full recovery, Mr. Fagan and his family marched right to Supervisor Barrett’s office to sing the praises of the men who saved his life. Phil Barrett was quick to facilitate an opportunity for Mr. Fagan to publicly thank "his heroes".

It's not all that often that the Paramedics and EMTs here, or anywhere, get follow-up on the patients they treat. But in this case, they not only got to celebrate a wonderful outcome, but they had the opportunity to receive a heartfelt thank you -- and a hug. Supervisor Barrett said we set a record for most hugs in a board meeting!

The icing on the cake was that Steve, Tom, Ed and Kevin were able to meet Mr. Fagan's family! In this video, Mr. Fagan is flanked by his #1 side-kick, son Daniel, while he reads a thank-you letter from his daughter Maggie.

A Heartfelt Thank You from Leah Ferrone on Vimeo.